By Unitednuclear.com – The chemistry and explosives experiments pages have since been removed from their site due to legal reasons. However, this article can still be retrieved (as of 2010) from http://www.i-hacked.com/content/view/13/48/


Building the M-80 is a very simple to follow process. In fact the hardest part of the whole deal is obtaining the materials needed. Before you even get started with your build you will need to make flash powder which you can learn how to do below. 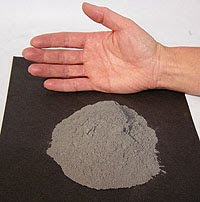 Flash powder is an explosive used in all firecrackers and larger Salutes such as M-80s and Aerial Bombs. Although there are many different formulas for Flash Powder, the safest (and the industry standard) is made just from potassium perchlorate and German Aluminum. It is far superior to any other flash powder formula in many respects.

70/30 Flash Powder:
This is the industry standard flash powder mixture found in all firecrackers and Salutes. All firework formulas are measured ONLY by weight.

Both Potassium Perchlorate & Aluminum Powder can be purchased at Skylighter.com and many other pyrotechnic shops, both online and off.

For more information on measuring and weighing, see below.

Flash powders are high energy explosive mixtures and require the utmost caution in their manufacture. Of the flash powder mixtures listed below, the only one that should be used in Salutes (exploding fireworks) is 70/30 flash powder, made from potassium perchlorate & aluminum powder.

Older flash powder mixtures containing potassium CHLORATE or SULFUR are very dangerous, very sensitive to friction and static electricity, and have been known to explode without warning.

The addition of sulfur to flash powder formulations increases the possibility of spontaneous combustion by the formation of sulfurous and sulfuric acid, and the composition's sensitivity to friction & shock. It does not increase the report sound.

Although this particular flash powder is not terribly sensitive, it will still explode with sufficient impact or friction. Never grind, pound, or subject any flash powder to friction or shock. Under the proper conditions, it may explode with devastating results. 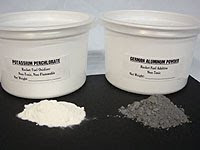 The two chemicals used to make flash powder. The one on the left is potassium perchlorate, a fine white powder. The other is German aluminum powder, a dust-like, dark gray powder that doesn't even really look like aluminum. Although "bright aluminum" powder can also be used in place of German aluminum, it will only work well in large Salutes with very heavy walls and thick end plugs. German aluminum will make a much more powerful flash powder that will produce a great report, even in small Salutes with thin wall tubes. 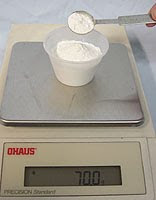 Begin by weighing out 70 grams (70%) of potassium perchlorate. 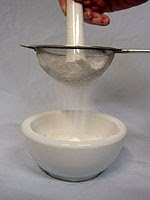 Next, you'll want to sift the potassium perchlorate through a very fine screen or strainer to break up any small lumps. There are many strainers available in kitchen supply shops and it's important to get the proper kind. The screen mesh (the size of the holes in the screen) should be much, much smaller than an ordinary window screen. You want a strainer with the finest mesh possible. You should not be able to move the individual wires that make up the screen if you try to with your fingers. Using a screen like this will defeat the purpose. Large clumps will simply move the wires and make the holes bigger allowing larger particles to go through. These type screens may cost around $2.00 to $5.00, but a good quality Stainless Steel screen with a very fine mesh (a mesh that won't slide around) will probably cost you closer to $10.00 or $12.00. You can find these types of strainers at some supermarkets, and kitchen supply stores (try your local mall). 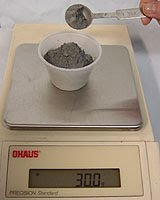 There are many ways to safely mix flash powder. We're going to show you the two most popular. One involves shaking the two in a plastic baggie, the other involves placing the two chemicals on a sheet of paper and gently lifting opposite corners until the composition is well mixed. This second technique is normally used with more sensitive mixtures, but there are those who only feel comfortable mixing any explosive mixture this way. Personally, we use the plastic baggie technique.

Pour the two chemicals on a sheet of paper.

Pour the chemicals into a Ziploc plastic baggie, making sure not to get any powder on the bag seal. If you do, the bag will not seal properly. 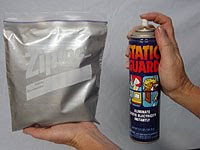 Although this type of flash powder mixture isn't very sensitive to static charge, we just like to add this optional step for the hell of it. "Static Guard" is a spray that you can find in your local supermarket/grocery store in the laundry supply aisle. It works great at dissipating static charges on a variety of materials. We like to spray it on just about everything (even our clothing) for added protection. On the other hand, we've fired 8" electrical discharges from a Van deGraff electrostatic generator, directly into piles of this type Flash powder and never had an ignition. Why then, do we bother to use Static Guard? The only answer is: "why not?” It's always better to be safe, than sorry, and why not take a few extra precautions when working with high energy materials? There’s always the possibility of some weird one in a million chance of an unusual occurrence, so why not take the extra second, spend the extra $2.00 and buy some added safety insurance. So, with that said, spray some Static Guard on your Ziploc baggie. 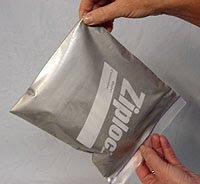 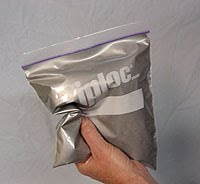 Shake the bag well to blend the two chemicals together.

Exploding fireworks are known as "Salutes", which include anything from a firecracker to quarter sticks. M-80s are Salutes that were originally used to simulate gunfire during military training. They were also sold in the U.S. until the Child Protection Act banned them in 1966.

Originally, M-80s were approximately 1-1/2" x 9/16" (inside) diameter cardboard tubes filled with Flash Powder. Several slightly different variations existed by different names (such as the "Silver Salute", "Block Buster", and "Ash Can"), but in general, all the devices were functionally identical.
A lot of times we get asked: "Which Salute was the strongest - a Cherry Bomb, an Ash Can or an M-80?" Since explosive power in these instances is essentially derived from the quantity of flash powder contained in the firework, the M-80 was the strongest of the bunch. At 1-1/2" long and 9/16" inside diameter, it held the greatest quantity of flash powder. Next was the familiar silver "Ash Can" at 1-1/2" long 1/2" inside diameter, and finally a Cherry Bomb who's Flash Powder chamber was about 3/4" in diameter.
Firecrackers and Cherry Bombs are Salutes that require specialized assembly techniques or equipment, so we're not going to cover them in this section. The following is how M-80s, Quarter Sticks and similar Salutes were made.
Keep in mind that assembling and even possessing such a device is illegal and considered a very serious offense unless you are licensed to do so. Exploding fireworks have caused more injuries that any other type, mainly resulting from improper use. The explosive force generated can easily remove fingers from the hand or send flying particles into the eye causing permanent blindness. As tempting as it may be to do, never light one of these and throw it. There have been many recorded cases of defective fuse causing the firework to explode someone's hand.
Assembly Procedure

The components needed for assembling an M-80: Visco Fuse (also called "Cannon Fuse", "Hobby Fuse or "Safety Fuse"), Elmer's White Glue, paper end plugs, a cardboard tube, and of course flash powder. With the exception of some old Chinese Crackers and Lady Fingers, flash powder is the only composition used in exploding fireworks… yes, even firecrackers. The M-80 shown here is made from one of our "Beefy" M-80 cardboard tubes. It’s a bit larger and thicker than the older "Classic" M-80 tubes, but we prefer it because it produces a louder report and a deeper boom. This particular tube measures 1-3/4" long x 3/4" inside diameter, with a 1/8" wall thickness. Any size tube with matching end plugs can be use for making Salutes. Simply put, the larger the tube you use, the more Flash Powder it will hold, and the larger the report will be. Just as a reference, our "Beefy" M-80 tubes hold about 8 grams of flash powder, the M-160 tubes hold about 13 grams, and the Quarter Sticks hold about 19 grams.

Using a 1/8" drill bit, a hole is drilled in the side of the casing. This is where the fuse will be installed. You can also make the Salute with the fuse coming out one end, like a stick of Dynamite. This is called "End Fusing", which we'll cover later on this page. Contrary to popular belief, there is no difference in the report if you put the fuse in the middle of the Salute or in the end. It will work the same either way.

A bead of glue is spread just around the inside of one end of the M-80 tube. This will adhere the end plug to the case.

The End Plugs used are just heavy weight paper pressed into a cup shape that fit snugly inside the tube. There are many other ways to plug the ends of the tube if commercial end plugs are not available. Some old manufacturing techniques use plaster or similar thick pastes to secure the ends. These are dangerous and should not be used. When the M-80 explodes, these solid plugs become projectiles and can blind or penetrate the skin and must be avoided. It is a misconception that end plugs must be thick for a loud report. Stick with thin, lightweight plugs that will fragment & not travel far when the firework explodes. Plugs made from pieces of tissue rolled into a ball, pressed into the end of the tube and thoroughly covered with white glue are acceptable. 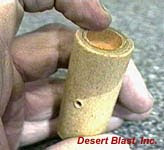 The End Plug is pressed into the tube until flush with the surface. Wipe off any extra glue that might seep out when the plug is inserted.

A piece of Visco Fuse is cut, no shorter than 3", and inserted into the tube. Make sure that the fuse is unobstructed and extends all the way to the bottom of the tube.

Lay a thin bead of glue around the fuse sealing it to the case.

The tube is then filled 3/4 full with standard 70 / 30 flash powder. This is the only Flash Powder that should ever be used in exploding fireworks of this type. Do not fill the tube more than 3/4 full.

Just as was done before, run a bead of White Glue just around the inside of the tube and insert an End Plug flush with the case. Wipe off any excess that may squeeze out.

Just for looks, the case can be painted red, signifying an explosive device. There are many different types of paper tubes available that already have a colored outer wrap. 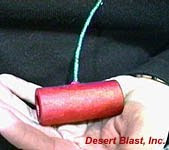 The completed M-80. Remember that these devices were banned for a reason. It is suggested that the construction of M-80's and similar devices be left to the licensed pyrotechnician. Always follow the basic fireworks theme: light fuse and get away. Never light any exploding fireworks in your hand.
Posted by Ben at 9:02 PM

Ben
The articles posted on this site were written by experts; nevertheless, all research and safety precautions should be taken before attempting to follow any instructions.