How to Make a Smoke Bomb (Anne Marie Helmenstine)

How to Make a Smoke Bomb
By Anne Marie Helmenstine, Ph.D.
http://chemistry.about.com/od/demonstrationsexperiments/ss/smokebomb.htm 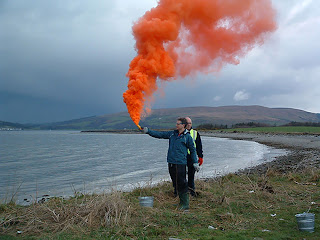 The smoke bomb you would purchase from a fireworks store usually is made from potassium chlorate (KClO3 - oxidizer), sugar (sucrose or dextrin - fuel), sodium bicarbonate (otherwise known as baking soda - to moderate the rate of the reaction and keep it from getting too hot), and a powdered organic dye (for colored smoke). When a commercial smoke bomb is burned, the reaction makes white smoke and the heat evaporates the organic dye. Commercial smoke bombs have small holes through which the smoke and dye are ejected, to create a jet of finely dispersed particles. Crafting this type of smoke bomb is beyond most of us, but you can make an effective smoke bomb quite easily. There are even colorants you can add if you want to make colored smoke. Let's start out with instructions for the easiest/safest type of smoke bomb you can make:

1. Sugar (sucrose or table sugar)
2. Potassium nitrate, KNO3, also known as saltpeter (you can find this at some garden supply stores in the fertilizer section, some pharmacies carry it too)
3. Skillet or pan
4. Aluminum foil

How to Make a Smoke Bomb

1. Pour about 3 parts potassium nitrate to 2 parts sugar into the skillet (5:3 ratio is also good). Measurements don't need to be exact, but you want more KNO3 than sugar. For example, you can use 1-1/2 cups KNO3 and 1 cup sugar. If you use equal amounts of KNO3 and sugar, your smoke bomb will be harder to light and will burn more slowly. As you approach the 5:3 KNO3 sugar ratios, you get a smoke bomb that burns more quickly.

2. Apply low heat to the pan. Stir the mixture with a spoon using long strokes. If you see the grains of sugar starting to melt along the edges where you are stirring, remove the pan from the heat and reduce the temperature before continuing.
3. Basically you are caramelizing sugar. The mixture will melt and become a caramel or chocolate color.

Continue heating/stirring until the ingredients are liquefied. Remove from heat.

4. Pour the liquid onto a piece of foil. You can pour a smaller amount onto a separate piece, to test the batch. You can pour the smoke bomb into any shape, onto an object, or into a mold. Soup or coffee cans are a common and easy to use containers. The shape and size will affect the burning pattern.
5. If you aren't going to clean your skillet immediately, pour hot water into the pan to dissolve the sugar (or else it will be harder to clean). Clean up any residue you may have spilled out of the pan, unless you want mini-smoke bombs on your stovetop.
6. Allow the smoke bomb to cool, then you can peel it off the foil. 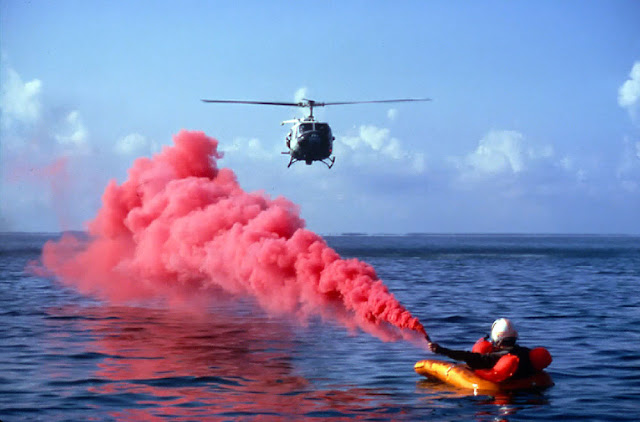 Powerful Mk 13 Smoke Flare being used in aircrew survival training.
How to Use a Smoke Bomb
The solid smoke bomb material is flammable and can be lit directly. You can light your smoke bomb using a lighter, preferably one of the long-handled types used for barbeque grills. Only light your smoke bomb in a well-ventilated area, on a surface that won't catch fire. The smoke bomb will burn vigorously (more slowly with a higher percentage of sugar) with a purple flame.

Alternatively, you could place a short length of wick into the smoke bomb when you pour it, and then light the wick.

Mix the zinc and sulfur. Insert a red-hot wire to ignite the mixture and produce smoke. This is a particularly smelly smoke bomb.

Black powder (gunpowder) or pyrodex can be mixed with other substances to produce a lot of smoke:

1. As a powder, mixed with sugar and sulfur
2. Mixed with sawdust
3. With sugar, sulfur, and a bit of material from a road flare (red flame)

The recipes for colored smoke bombs require chemicals that may not be readily available unless you have access to a chemistry lab, but it's worth knowing how it's done. Parts or percents are by weight. The ingredients are sifted together and ignited to produce the smoke.

It's fairly easy to make colored flames by adding these chemicals to your smoke bomb recipe:

Essentially, you are adding metal salts to get colored flames.

The metal salts listed here produce a relatively safe smoke. Use caution when considering other metals salts, as some compounds may produce toxic smoke. 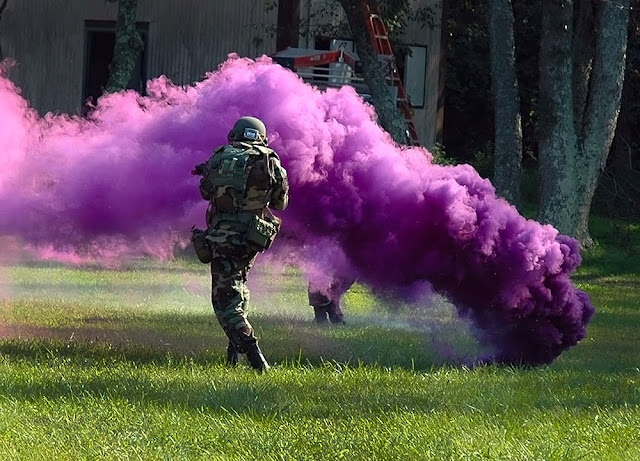 This is a purple smoke grenade, used during a military training exercise. The typical colored smoke bomb is like a normal white smoke bomb, with a dye released into the smoke.
U.S. Air Force photo/Tech. Sgt. Scott T. Sturkol

Below is another article by the same author, which deals with making a more authentic colored smoke bomb. It is also probably a little easier to understand and follow.

The classic smoke bomb is a great project for the home or lab, producing lots of safe smoke, with purple flames. If you get dye and consider the shape of your creation, you can make a smoke bomb that billows clouds of brightly-colored smoke. This project is easy and safe enough to at home. Adult supervision is required.

- Mix 60 g potassium nitrate with 40 g sugar in a saucepan over low heat. It's a 3:2 ratio, so if you don't have grams, use three large spoonfuls of potassium nitrate and two large spoonfuls of sugar (3 tablespoons and 2 tablespoons, if you feel the need to be precise).
- The sugar will carmelize and brown. Stir the mixture continuously until it resembles smooth peanut butter.
- Remove the mixture from heat.
- Stir in a spoonful of baking soda (rounded teaspoon is fine). The baking soda is added to slow down the combustion when the smoke bomb is ignited.
- Add three large spoonfuls (3 tablespoons) of powdered organic dye. Blue dye and orange dye are said to produce better results than the other colors. Stir to mix well.
- Construct the smoke bomb while the mixture is still hot and pliable.

- Fill a cardboard tube with the warm smoke bomb mixture.
- Push a pen or pencil down into the center of the mix (doesn't have to be all the way to the bottom but should be enough that the pen stands in the mixture). You could use a different shape, but the cylinder works really well.
- Let the mixture harden (about an hour).
- Remove the pen.
- Insert a firework fuse. Push pieces of cotton balls into the hole to tamp the fuse securely inside the smoke bomb. Be sure there is fuse left outside of the tube so that you will be able to light your smoke bomb.
- Wrap the smoke bomb with duct tape. Cover the top and bottom of the tube, too, but leave the hole area with the cotton and fuse uncovered.
- Go outside and light your smoke bomb!
Posted by Ben at 8:58 PM

Ben
The articles posted on this site were written by experts; nevertheless, all research and safety precautions should be taken before attempting to follow any instructions.